Which is worth more, Friday or…?

Standard: RL.9-10.10. By the end of grade 9, read and comprehend literature, including stories, dramas, and poems, in the grades 9–10 text complexity band proficiently, with scaffolding as needed at the high end of the range.

Learning Target: Students will read several poems by Rumi, then use one of them as a template to compose their own poem.

Activator: Looking For Your Face

Today we’re talking about poetry!! Aren’t you excited! Seriously, the more exclamation points I use, the more excited we should be. FRIDAY!!!! POETRY!!!!! Wait wait I think I have a meme for this… 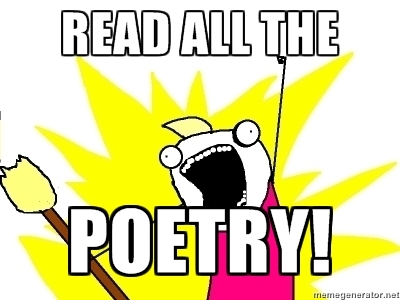 There!! Okay, down to business. We’re going to be reading several poems from an author named Rumi today. This guy is another world-famous author (I swear, these people really are famous…) and this one has written a lot of spiritual poetry from the world over. He lived centuries ago, but even so, the ideals that he writes about are things we can relate to today. This will be a concept you’ll want to remember for next unit, when we talk more about theme and what that entails.

For today, we’re going to read the four Rumi poems in our textbook on pages 118-124. They are

An Elephant in the Dark

Which is Worth More?

There are two kinds of happiness one shown,
As a smile on a child’s face
From laughter at a corny joke or funny situation,
Collecting stories to tell to make others laugh
As well as happy memories.

With such happiness you rise in the world.
You get friends, and people like you.
In regard to your popularity in retaining
happiness. You grow with this happiness
In and out of circles of friends, getting always more
posts on your Facebook wall.

There is another kind of happiness, one
Already completed and preserved inside you.
A silent kind of joy. A deep-seeded love
In the center of the chest. This other happiness
Does not laugh as often or make friends. It’s peaceful,
And it doesn’t move from outside to inside
Through the jokes or gaffes of others.

This second happiness is a fountainhead
From within you, moving out.