We are the Knights Who Say Monday!

Morning, everyone! I hope you guys had a great weekend 🙂 I spent my Sunday at the Georgia Renaissance Festival, which was AWESOME. Remember, 15 points extra credit on your Pick Three! Project if you bring me a picture of you at the festival! 🙂

Learning Target: Students will finish watching their example satire, and then finish writing their parody stories.

Activator: We will finish watching Monty Python and the Holy Grail that we started on Friday.

Welcome to Monday! Today we’re going to kick it off by finishing the  movie we started on Friday – I think we were all at the Knights Who Say Ni scene. This is definitely a classic movie, the sort of thing that everyone watches in their lifetime, so I really hope you’re all enjoying it, or at least finding it a little funny 😛

After the movie, we’ll continue to write our own parody stories. Remember:

…and that’s everything! Tomorrow we’ll be back in the lab, so you guys should be relatively close to finishing up your Pick Three! Project after that, because it’s due next Tuesday, May 1st!

Monty Python and the Holy Friday!

Learning Target: Students will continue their study of satire and parody by finishing their reading of “A Connecticut Yankee in King Arthur’s Court” and watching the first half of Monty Python and the Holy Grail.

Activator: We’re skipping the daily video today in favor of our movie!

Welcome to class! Today’s MOVIE DAY!!! And food day 😀 I hope you guys are excited for a fun party day! Huzzah!

…But, that makes for a very short blog 😛 We’re going to finish reading the story we started yesterday, and then watch the first half of our movie, Monty Python and the Holy Grail. Here’s the IMDB entry on the movie, and if you were curious, here’s what the movie poster looks like: 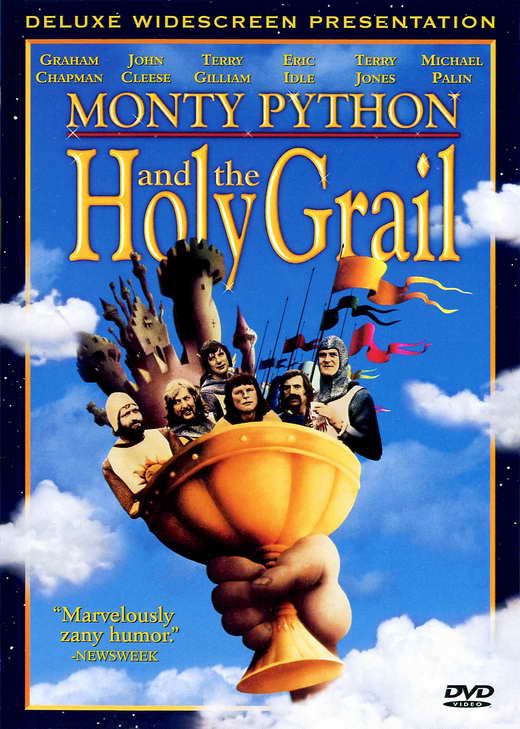 Welcome to Wednesday! It’s all downhill from here, right? And you know what? After this week, only four more weeks until finals, and then SUMMER VACATION!!!

Standard: ELA10W2 The student demonstrates competence in a variety of genres.

Learning Target: Students will complete reading “Morte d’Arthur” and then learn about parodies and satires in preparation for tomorrow and Friday’s texts.

So, today we’re going to finish reading the poem we started yesterday, and then talk about parodies. Excited yet? I am 🙂

The reason we’re learning about parodies is because we’re going to be studying two of them! The first was written by Mark Twain, and it parodies the King Arthur legends by having a “modern” person go back in time and expose the absurdity of some of the things from medieval times. The story was written a while ago, so the characters aren’t really modern anymore, but it’s still fun to read! Friday we’ll be watching another very famous parody  – Monty Python and the Holy Grail.

So, without further ado, here’s a nifty PowerPoint on satire and parody! I likes me some PowerPoints lately, don’t I? Anyway, we need to get some background information on what a parody is, because after we read and watch a couple, we’re going to write a little parody of our own! I think you guys have done a good job with this so far (I’ve seen some awesome Facebooks for King Arthur) but we’ll do something a little more formal  🙂 See you guys Thursday!

Monty Python and the Holy Tuesday

Welcome to Tuesday! I hope y’all are enjoying the movie so far. Today we’ll be finishing it up, then looking at some more King Arthur hoopla.

Standard: ELA10RL2 The student identifies, analyzes, and applies knowledge of theme in literary works and provides evidence from the works to support understanding.

Learning Target: Students will finish watching Monty Python and the Holy Grail and then take a checkpoint quiz to determine their progress in class thus far.

Activator: Our daily video will be the ending of Monty Python.

I hope you guys enjoyed the movie! We’ll get some more formal reactions to it later on, but for now let’s spend the rest of the class giggling about it. Then, I can hiss at you to be quiet while we’re taking a checkpoint quiz, even though I really don’t want to. What a fun day!

So, after the movie and the checkpoint quiz, and going over the checkpoint quiz, we put our Thinking Map Caps on and made a double bubble map! I wanted to compare and contrast the Monty Python version of King Arthur with the legendary version we’ve been studying. Tomorrow, we’ll do more with the thinking maps we’re making today, but I would like y’all to please copy it off the board so you have it for tomorrow. I’ll also post a copy to the blog for you to see!

PS – Do you guys like the new layout? I’m a fan, personally 🙂

Apologies to first block. I forgot to take a picture of your map. 🙁 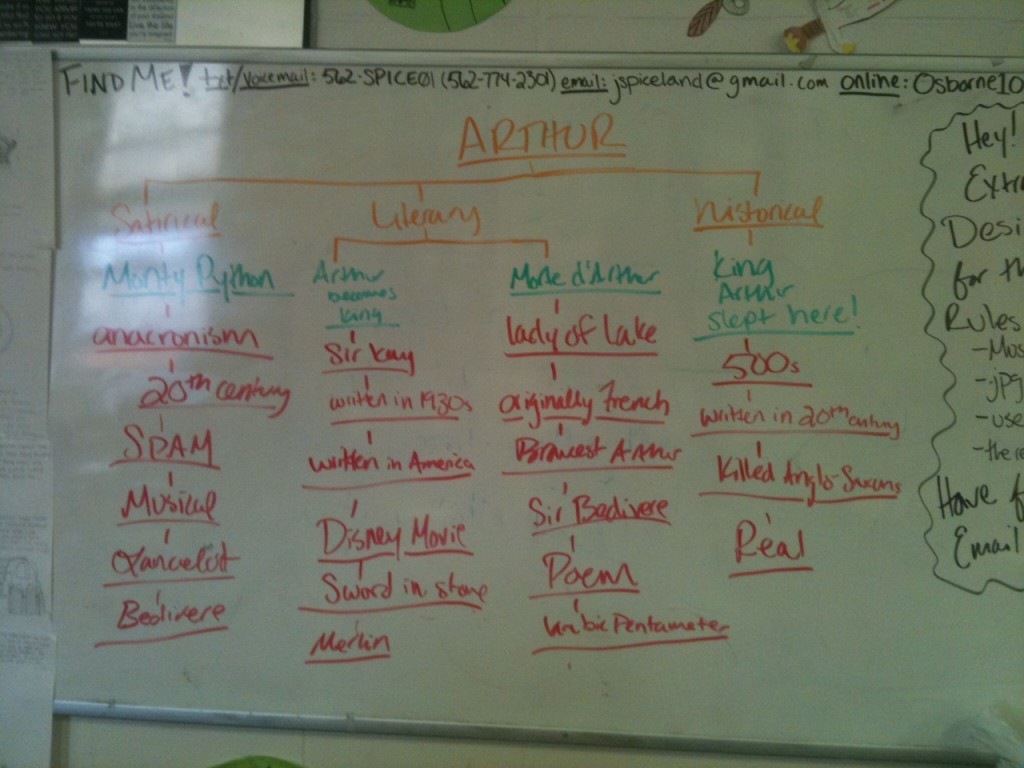 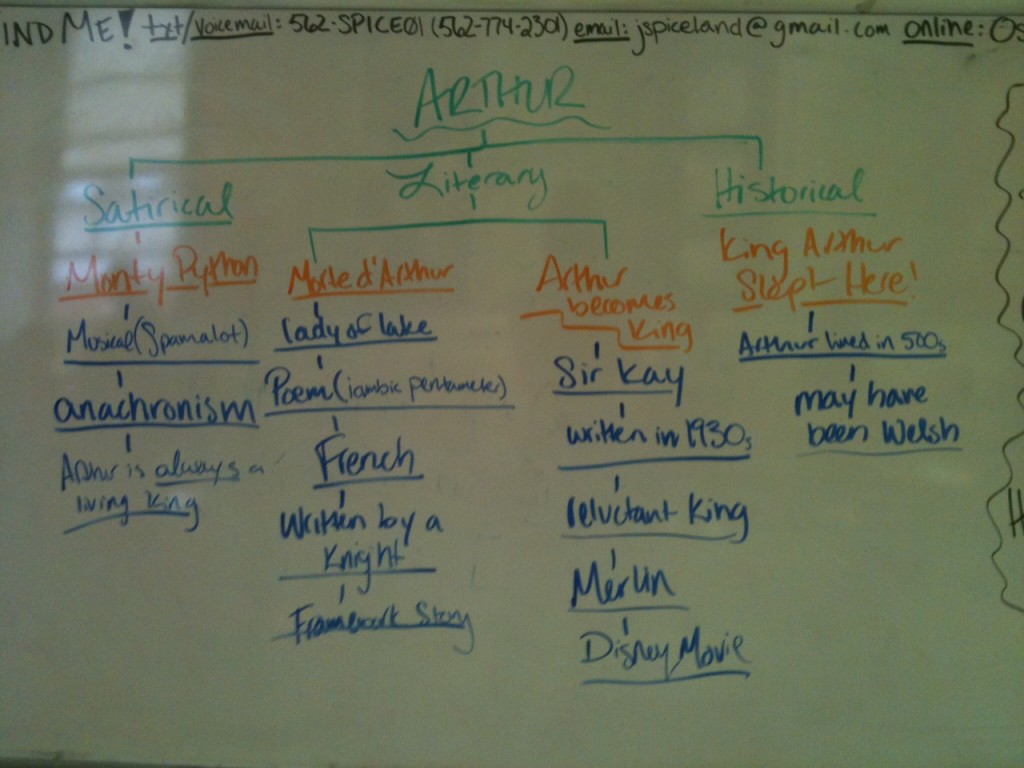 Happy Monday, everyone! Today should be AWESOME, ’cause we’re watching a MOVIE WOOOHOOO!!!!

Learning Target: Students will turn a critical eye towards Monty Python and the Holy Grail, and see another interpretation of the King Arthur legend. They will understand what a satire is and see a classic movie.

Activator: We’re skipping the daily video today since we’re watching a movie all day 🙂 Consider your activator microwaving the popcorn!

So, since I’m probably not pulling this up in class anyway (I’m probably using the DVD player today 🙂 ) I’ll keep this post short. ENJOY THE MOVIE, EVERYONE!!